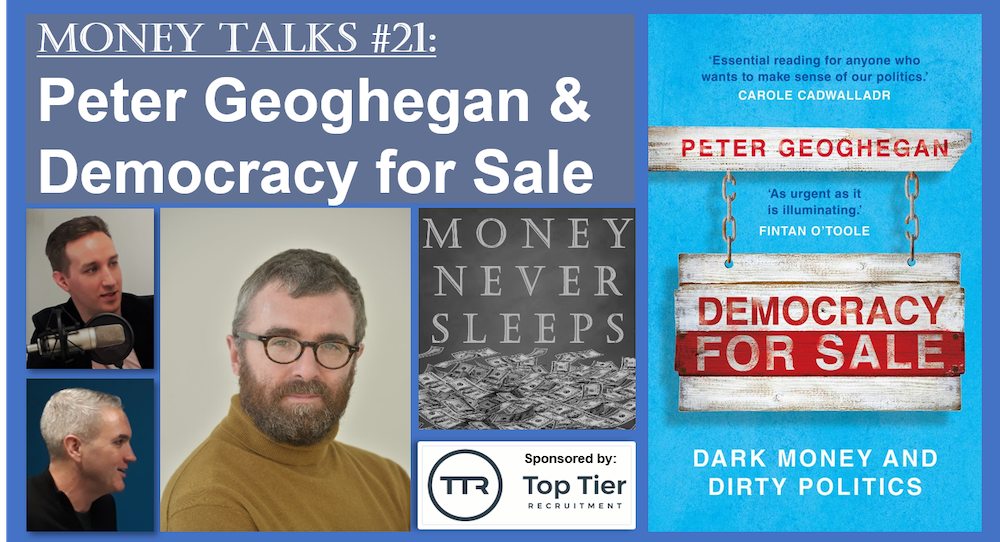 Peter Geoghegan joins us on the show to talk about his new book 'Democracy for Sale: Dark Money and Dirty Politics', his love of cricket and a remarkable story about Longford/Argentina emigration!

This week, Eoin and Pete have the pleasure of talking to Peter Geoghegan about his book,  ‘Democracy for Sale: Dark Money and Dirty Politics’.

It is a fascinating story of how undisclosed donations have infiltrated British politics, undermining public faith in democracy and fuelling the rise of populism across the West.

Pete and Peter also discuss their common love of baseball and cricket and Peter shares a fascinating story about emigration from Longford to Argentina!

For insights delivered to your inbox beyond the spoken word, subscribe to our MoneyNeverSleeps newsletter right here on Substack.

Peter Geoghegan is an Irish writer, broadcaster and investigations editor at the award-winning news website openDemocracy. He led openDemocracy‘s investigations into dark money in British politics that were nominated for a 2019 British Journalism award and the Paul Foot award. His journalism has appeared in the New York Times, the Guardian, the London Review of Books and many other publications. He has made documentaries for BBC Radio Four, worked on investigative TV programmes for Channel 4 and regularly appears on British and international broadcast outlets.

His most recent book, Democracy for Sale: Dark Money and Dirty Politics, was published in August 2020 by Head of Zeus. His previous book, The People’s Referendum: Why Scotland Will Never Be the Same Again, was nominated for the Saltire First Book Award. He is co-founder and current chair of Scottish investigative website the Ferret and lives in Glasgow and London.