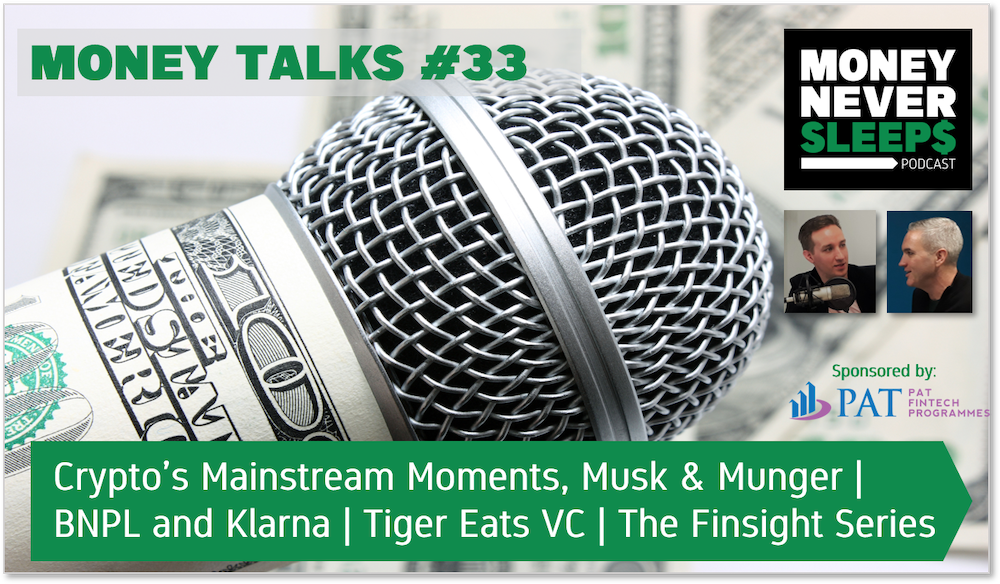 This is our latest Money Talks segment, where we get into the onslaught of crypto’s mainstream moments in the past two weeks featuring Elon Musk’s antics and Charlie Munger’s view on bitcoin, we dig into BNPL (Buy Now Pay Later) for the first time with a look at Klarna, we pick though Tiger Global’s supersize appetite for deals previously just the purview of VC, and we hear from Rory Galvin from Navirum on the Finsight Series.

Eoin Fitzgerald on Dogecoin: “I'm kind of still on the fence about Bitcoin but seeing what's happened with Dogecoin and even with the Dallas Mavericks accepting it as a form of payment, it's all great fun, but it makes a mockery of the real progress with cryptocurrency.”

Pete Townsend’s sentiment on the Dogecoin highjinks: “One part of me zooms out and says that's okay. You know what? We got a long, long way to go here. The other part of me is slightly annoyed at Dogecoin, but how many people out there are slightly annoyed or more at just Bitcoin? Like Charlie Munger, who is Warren Buffett's longtime pal.”

Pete imagining the unthinkable: “What if Bitcoin just vanished? What if the mask was torn off, hey, we're a big Ponzi scheme, all of this was just a big joke. Everything will go back to normal. Right? I think that's what a lot of minds in traditional finance expect to happen, or have their fingers crossed that it will happen. But the fact that when you just ask that question and the ridiculousness of it actually happening, almost acts as a validation of this whole space.

No Mercy No Malice: The Martian (Scott Galloway, 7-May-21)

Eoin asking the big questions on Klarna: “Whatever happens with the regulation of BNPL, well, it happens.  Then the question is how do Klarna move into other product offerings? How do they move upstream or downstream? Because this is just point of sale lending. How does Klarna sell you more products?”

Pete speculates on a different angle for Klarna: “I think it’s a data play. They could take this data that they have been amassing with 200,000 retail partners, 64 million-plus users and turn that into a pretty good indicator of retail sales and revenue projections.  Then, they can get their heads around offering credit to the retailers and go from a B2C offering to a B2B offering.”

The Checkout as a Territory (Mario Gabriele, 22-Nov-20)

Pipit embraces crowdfunding ahead of Series A investment (Irish Times, 7-May-21)

The Finsight Series: Going Digital in Banking and Wealth Management - event link - featuring Pete Townsend, Rory Galvin from Navirum, Bryan Clagett from Moven and Niall Twomey from Fenergo on 27-May-21 at 11am EDT / 4pm BST.